From time to time, I get asked how I ended up making games. You’ll excuse me if I indulge myself in this nostalgic tale of my computing history.

I guess the best place to start if with Start Trek. I was born in 1963. Star Trek aired from 1966 to 1969.  So somewhere between when I was 3 to 6, I watched Star Trek with my 2 older brothers. I can’t say I really remember much about it but I remember I loved the idea of space ships and aliens and computers. You have keep in mind that, at the time, the US was engaged in a massive space race against the Russians and actual people were leaving planet Earth and stepping foot on the moon. It didn’t seem all the far fetched to think that the world of Star Trek was all that far off.

Of course, while real computers were making their way into the business world, they were still no where to be found in the homes of any American, average or otherwise.  Star Trek was off the air by the 1970’s but lived on in cartoon form and reruns.  In the fifth grade, I spent countless hours after school hypnotized by the black and white light of an old TV screen memorizing each and every episode. Star Trek has 79 episodes which means that a local TV station can play a new 1 hour episode each week day for 4 months. Once they broadcast the last episode, they start the process all over again starting with the first episode. It was here that I learned all the names of the characters, planets, ships and episodes.

At about the same time, I discovered that the Winslow Junior High School Library had a stack of movie rental catalogs listing movies from the 1900’s to present. The catalogs were intended for teachers to be able rent a film to be shown to a class or the entire school. That never happened but the catalogs came each year and were stocked in the library. What I loved was that each book listed the movie along with relevant information, the director, the cast and a plot summary. I checked these books out of the library and carried them with me everyday while I read and re-read them memorizing every detail of films I had never, and probably would never, see.  That didn’t matter. It all got stored up in my big brain and, even today, I can pull up that information when needed. That skill would come in handy latter. 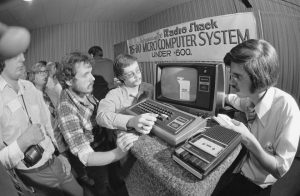 Sometime around 1977, I had begun hanging out at the Waterville, Maine Radio Shack.  They had an actual, honest to god, computer on display, the Tandy TRS-80 and I wanted to be a close to a computer as possible. While it wasn’t exactly what I saw on TV, it was the closest thing I could find.

I’d like to say I bought one and took it home but since it cost US $599 ($2343 today) that wasn’t possible. My first actual computer was from Radio Shack but was made of p 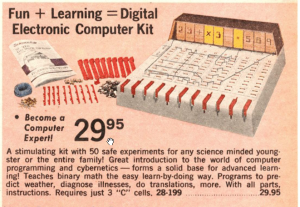 lastic, paper, some wires and a battery.  Normally, a kit like this would be far too expensive, but since I checked in almost everyday, I spotted what must have been a returned item on the discount table.  I’m sure some other kids opened the box, saw the wires and paper and closed it right up again in disgust.   I didn’t have that problem. I bought it, took it home and put it together. The slight instruction manual taught me binary, hex, logic circuits and computer math. It was really a great low-level introduction to computers and served as a great foundation. 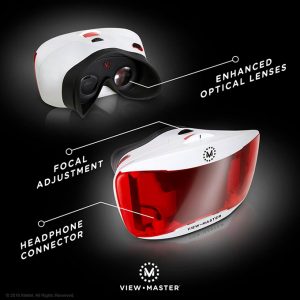 I’ve been spending a lot of time in VR Space using an HTC Vive and while I like it, it is cumbersome to wear and it’s just a hassle to constantly remove and put back on the headset when you’re trying to do any debugging. I was thinking, “Boy, I wish a had a simpler VR headset handy.”   I was thinking of getting a Google Cardboard unit to see how that worked and while I was poking around Amazon on stumbled on this a high end Google Cardboard device from Mattel called the View Master Deluxe VR Viewer. The review were positive so I parted with the $29.99.

It arrived in 2 days and after unboxing, it was clear that Mattel did a really nice job on this unit. It’s study plastic and holds a smartphone securely.   I was disappointed to see that it’s not possible to use the headphone extension cord inside the unit to bring audio to the outside of the unit. The Apple lighting port to audio jack connector doesn’t have enough room to fit inside the unit.  Luckily, I switch to using an iPhone 6S and got up and running in no time. 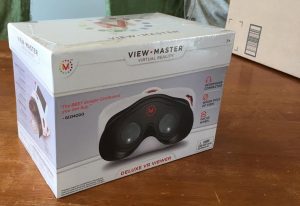 I’ve tried a number of VR units and always end up trying to fight my cram my glasses inside the unit. I was pleased when I realized that because of the focal adjustment wheel, I could use the unit without my glasses!  The result is that this unit has about the most clear picture I’ve seen on any headset so far! Go figure…

My son, Xander, and I played with the unit and tried out several apps. Between the two of use, we didn’t put the View Master down all day and even the next. For $30, I figured we’d try it out a few times and it would find it’s way to the gadget heap. Not so fast! While playing games on the unit if cool, the real excitement starts when you add in Youtube which has a number of 360 degree videos.  I know this thing is a toy, but I couldn’t help feel like that we are standing on the edge of revolution in content viewing. TV just doesn’t live up to the immersion you feel using even this low end headset. Job well done Mattel!